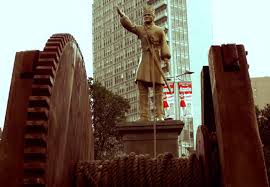 Ahead of Game of Thrones season four, Sky wanted to promote its premium subscription channel in New Zealand.

The campaign, created by DDB, rallied the online community around their hatred for the character Joffrey.

A 7m statue of the character was built with a rope around its neck.  Each tweet (#bringdowntheking) received turned a winch eventually toppling the statue.